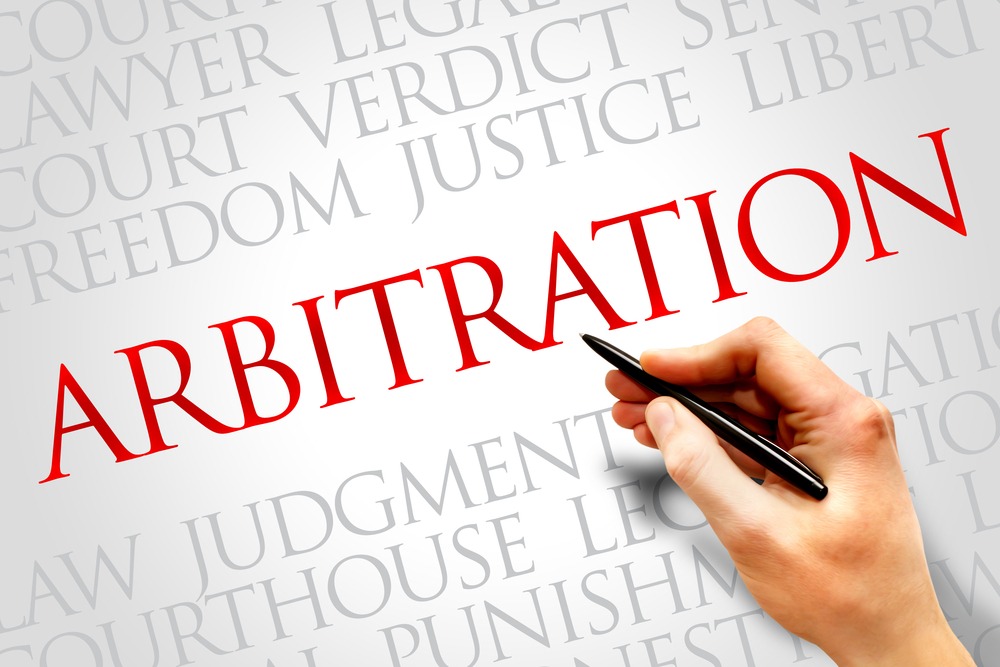 Writing contracts is a difficult task, and many people resort to online stock / template contracts that include unnecessary and/or complex clauses. Most businesses need to refresh their contracts every few years to keep up with changing laws, employees, and business clients. Here, we’ll go through some basic terminology in contracts and some things to watch out for.

Continuing from last week’s article, where we discussed the parties involved in contracts and the importance of The “Merger Clause,” this week we’ll discuss whether to opt for arbitration instead of regular litigation.

To Arbitrate or To Sue?

Background info on arbitration courts:
The courts usually consist of 1-3 arbiters that will review your case at a hearing that’s much less formal (and less costly) than normal federal and state courts. Arbitration judges (aka arbiters) are not required to go through the same training as regular judges, and lawyers advocating for their clients in arbitration hearings don’t have to go through all the same formalities as they would in a regular court.

For some time now, there’s been a movement towards using arbitration courts over federal or state courts for smaller contracts. You might have noticed that arbitration is usually insisted upon by the stronger party, e.g., on the back of baseball tickets and cruise ship contracts.

There are a number of reasons for this move, but it mostly comes down to time and money. Federal courts have a large  backlog, partially due to all the filibustering that Congress has done to prevent new federal judges from getting sworn in. While this was somewhat fixed last year, it has still left federal courts with a giant backlog of lawsuits, especially in the private sector, which usually means that it will take years before a case could actually get to trial in federal court. Backlogs may exist in state courts as well, but the length of these backlogs differ by state.

Then there’s the money issue.
Lawsuits cost a great deal more when the lawyers have to comply with all of the red tape that formality brings. Just about every argument in federal court requires its own motion or sets of motions (a motion is a formal essay, essentially, describing the grounds for an argument or procedural request to the judge), and all motions can—read: will—be responded to by the opposing side, which in turn prompts a response to the opposing counsel’s response motion to the initial motion (seriously, that’s the name of the document: “response to the opposing counsel’s response to the initial motion for ____)

It’s all very different if you pick an arbiter to review your case. Sure, some arbiters are more formal than others and require more lawyer-hours to get through, but on the whole, going through arbitration is significantly cheaper than suing in federal or state court.

Is an arbitration decision binding on the parties?
Yes, for all intents and purposes. There are procedures in line for judges to review an arbiter’s decision, but these are almost never overturned; an enormous amount of discretion is given to the arbiter’s decision.

So why doesn’t everyone go to an arbiter?
It’s cheaper and takes less time, right? Well, helpful rhetorical question device/person, that’s true, but it’s important to understand that sometimes formalities are necessary to reach the correct decision. The great thing about federal judges is that the cards are sort of stacked against their being biased. This is caused by what we call Appellate Review; just about every decision that a federal judge makes goes on record and can be appealed and overturned by that judge’s superior court (such as appeals courts and the Supreme Court). When a lower judge’s decision is overturned, it means that the judge got the law wrong.

Also, sometimes those costly formalities are what save your case. Often, each smaller decision that the judge/arbiter makes should be thoroughly fleshed out through formal motions and arguments in a federal court where the hearing could take years, rather than both sides essentially yelling to the arbiter about their case in a hearing that’s limited to 3 days. The latter hearing may be faster, but the arbiter is forced to make a decision too quickly, and that decision could end up being the wrong one.

Finally, court decisions can come down to a game of attrition. If a party has a weaker case than the other side, it’s a common tactic to load up the other side with formalities, motions, and so forth, in order to make them expend too many resources to continue zealously advocating their arguments. This is when money becomes so important. It’s always possible that the judge will catch the other side’s they-have-a-stronger-case-so-let’s-wear-them-down-strategy and put an end to it, but there’s no guarantee that the judge will, and again, the judge is always watching out for how his or her actions will look if they are appealed to a higher court. More often than not, it’s in judge’s best interests to follow up on every motion, even if the argument is far-fetched. This makes the attrition strategy all the more successful.

Overall, opting for arbitration over federal or state courts in your contracts is usually a decision that will save you a great deal of time and money. Do be aware, however, that there are risks involved. Arbitration decisions aren’t reviewed as thoroughly as regular judge decisions, and the arbitration hearings are shorter and less formal, all of which means that arbiters can be more apt to get the decisions wrong than their more formal and expensive judge counterparts.

That’s it for this week, next time we’ll discuss the importance of loopholes (how to watch for them and / or create them), which state’s laws to use in your contracts, and the wonderful technology that is liquidated damages!

There’s a big decision for the Gaming Industry to be made in the Supreme Court this Friday about whether it’s illegal (gambling) to play poker at private in-home tables. This could also mean a lot for Magic the Gathering players, whose prizes at larger tournaments have long been depressed by gambling laws.